Held at the Institution of Engineering and Technology in London, Rathbone Greenbank’s 21st annual Investor Day brought together speakers and delegates to discuss the complex evolution of working practices and consider how to promote fair, fulfilling employment and gender equality in the modern economy. 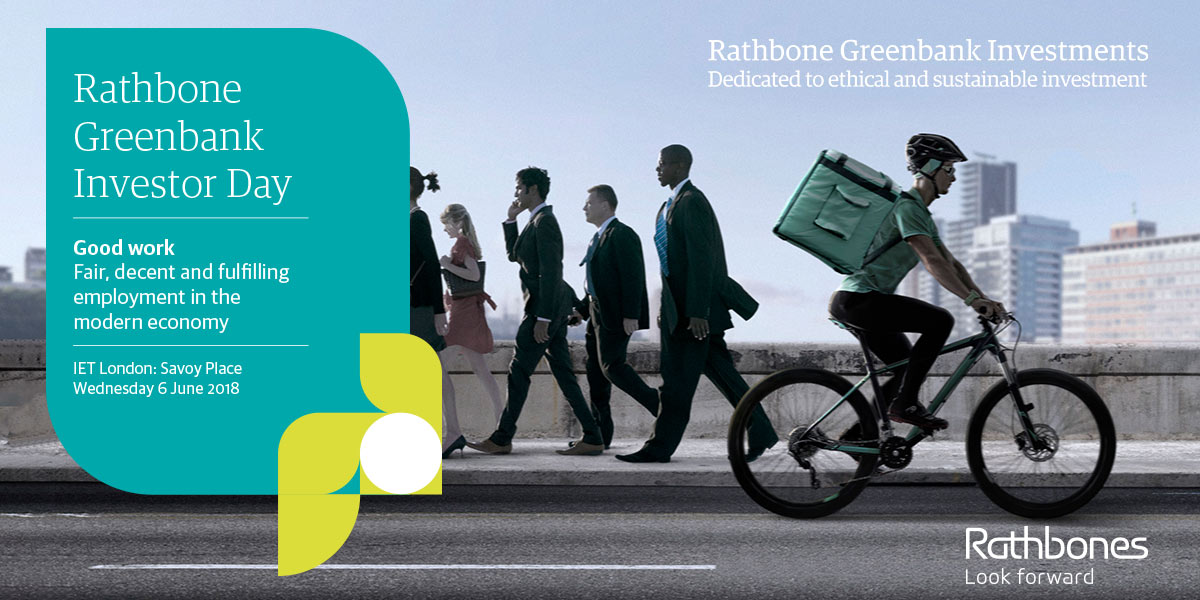 Framing the day’s topic within philosopher Thomas Carlyle’s concept of “a fair day’s wages for a fair day’s work”, Rathbones’ chairman Mark Nicholls opened proceedings by reflecting on the gender inequalities that were rife at the start of his career.

John David, head of Rathbone Greenbank, outlined how Rathbones was focusing on the principles of ‘good work’ by signing up as a Living Wage employer, investigating its supply chains and exploring how to improve workplace diversity and equality of opportunity.

Brhmie Balaram, senior researcher at the RSA, provided an overview of the Society’s study of workers’ experiences and financial security; she also highlighted its role in producing a more complex and diverse analysis of the domestic workforce than is currently classified under UK law.

The RSA’s research identified seven distinct worker ‘types’ based on factors such as fulfilment, opportunities for progress and support, and income volatility. It also highlighted the value of interesting work and individual autonomy and demonstrated generational differences in perceptions of financial security.

The breadth of individual experiences in work indicated that issues of security and enjoyment weren’t always fixed by altering worker contracts: investors were urged to encourage companies to explore a wider range of solutions.

Kate Elliot, senior ethical researcher at Rathbone Greenbank, suggested there were extremes of benefit and exploitation within insecure working models.

Rathbone Greenbank assesses how well companies are investing in and valuing employees against health and safety, remuneration and work/life balance indicators, but would like to see an improvement in the quality of company reporting.

Fair remuneration and the Living Wage

Graham Griffiths, head of partnerships and operations at the Living Wage Foundation, explained how their real Living Wage rates were distinct from – and greater than – the government’s “national living wage”.

The Foundation works to convince companies to match real Living Wage rates voluntarily and benefit from the knock-on effects: of over 4,300 accredited ‘responsible employers’, 93% reported benefits to their businesses while 86% indicated evidence of a reputational boost.

The value of gender diversity

Equileap is a social venture that aims to accelerate gender equality and fair pay throughout the workplace.
Co-founder Jo Andrews observed that while gender equality featured prominently as one of the 17 UN Sustainable Development Goals, its relevance could be found in many of the others.

She pointed to research which has shown that companies which lead the way in gender equality perform better than their peers, display lower volatility and have better safety records. Alongside tangible benefits for society, it’s estimated that workplace gender equality could add $28 trillion to global GDP by 2025.

James Coldwell, investor engagement officer at ShareAction, highlighted the efforts of the DfID-funded Workforce Disclosure Initiative (WDI) to secure annual comparable workforce data from listed companies and provide investment analysts with a clearer picture of corporate responsibility in this area.

The first year of company disclosures saw an encouraging 45% return from 75 companies, but a disappointing level of public disclosure. Looking ahead, the WDI hopes to scale up and internationalise its efforts, encouraging companies to use the WDI to go beyond compliance and persuading more of them to report publicly.

During the Q&A session that followed, the panel discussed a variety of points raised by the audience, including whether we should be engaging more with individual workers and trade unions; the tax implications of the gig economy; the scope for improving standards beyond the Living Wage; and the suitability of gig economy companies as they currently operate for socially responsible investors.

A full report of this event will be published later in the summer and will be available on this website, alongside short video interviews with our Investor Day speakers.