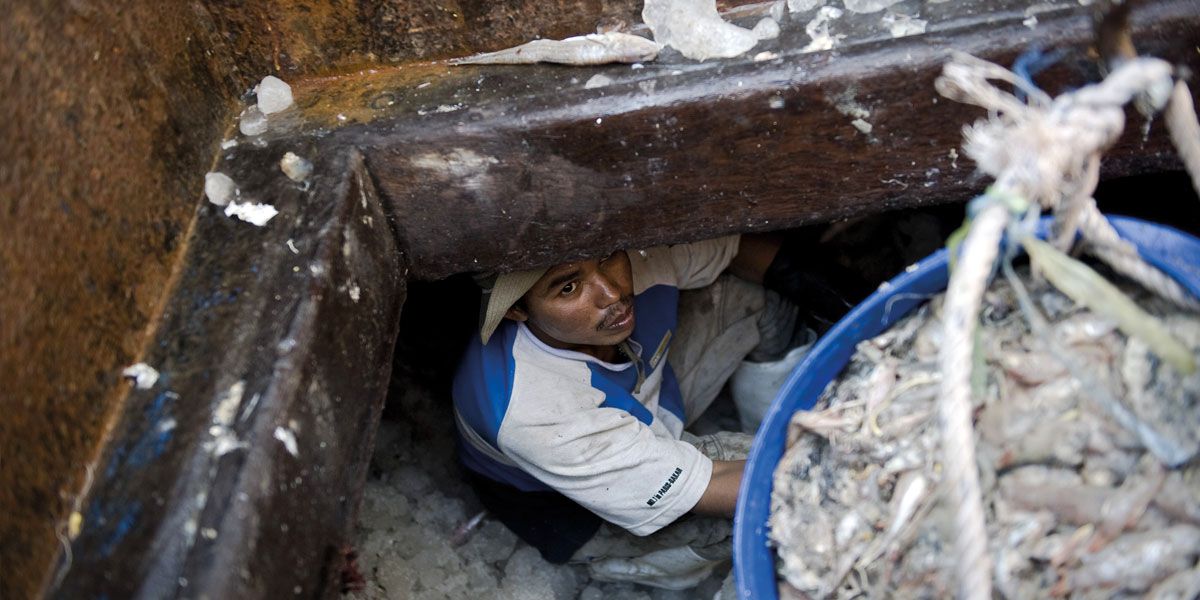 Before and during the event, a number of clients asked for more information about the image featured on the invitation, which also appears on the front cover of this edition of our Review.

The picture is of an unnamed Cambodian fisherman working on a prawn fishing boat in Thailand. Human trafficking and forced labour is endemic in the fishing industry, primarily in the developing world, although cases have been identified as close to home as the coasts of Ireland and Scotland.

It is not uncommon for migrant workers to pay to be smuggled across the border, only to find that they have been sold on and enslaved to a boat captain. They may end up working in dangerous and squalid conditions, remaining at sea for years at a time and being traded from boat to boat. Sickness or injury can often lead to unprofitable workers simply being pushed overboard.

This image shows just one face of modern slavery but, as our speakers were keen to stress, this is an issue which takes many forms both overseas and close to home.

The broader issue of human rights and labour standards has always been integral to our research at Rathbone Greenbank so we were delighted to see several years of engagement effort, led by our own Matt Crossman, culminate in the inclusion of a supply chain transparency clause in the UK’s Modern Slavery Act 2015.

Our efforts have carried on through our co-sponsorship of Finance Against Trafficking’s 2015 report on forced labour and we will continue to press for enhanced disclosure by companies on efforts to eradicate slavery from their supply chains.

We were therefore delighted to be able to assemble such a knowledgeable panel of speakers for the event — and were especially privileged to have Steve Chalke, founder of Stop the Traffik, as our keynote speaker. By way of his infectious enthusiasm — and no little humour — Steve filled the auditorium with the idea of bringing about change by both empowering individuals and collective action.

Our thanks also go to our other speakers who represented the policy making and corporate response to modern slavery. Miriam Minty was recently appointed deputy head of the Modern Slavery Unit at the Home Office so we were grateful that she agreed to speak in her first month in the post. Louise Nicholls, head of responsible sourcing at Marks & Spencer, has been with M&S for over 20 how the company’s ethical trade programme has advanced over the past decade.

In this Review we have chosen the manufacture, sale and disposal of smartphones to illustrate the complexity of modern supply chains — and the stages at which slavery can occur.

Aside from the moral obligation to give thought to human welfare in all regions of the world, as consumers and investors we may find ourselves more closely connected to slavery than we might think.