COP26 according to Greenbank’s experts 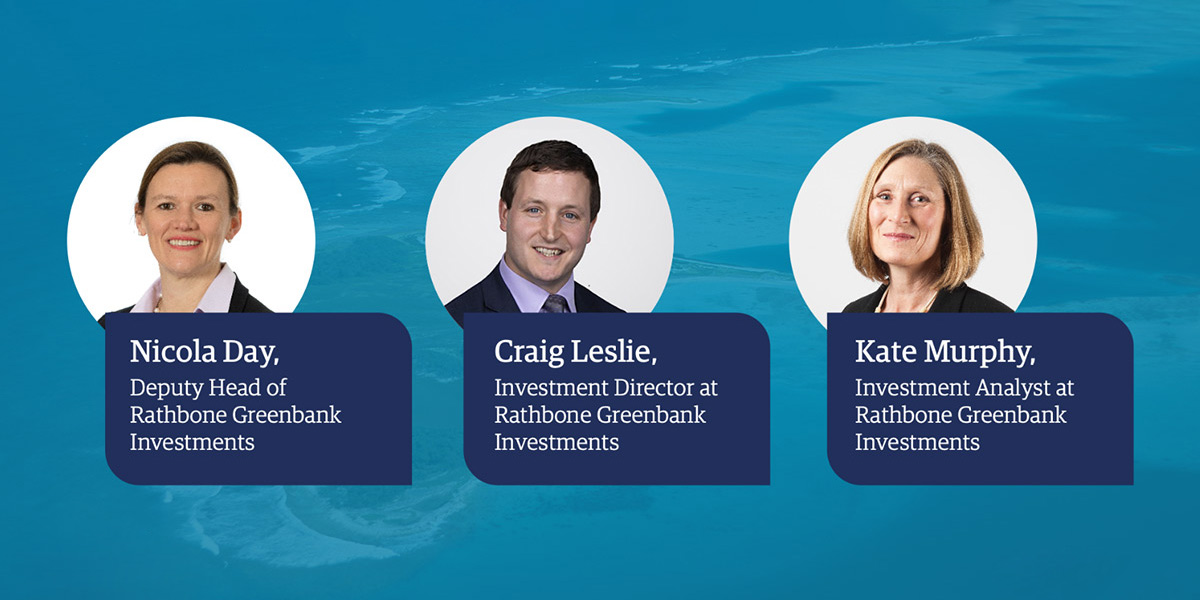 Having had time to reflect on the impact and announcements of COP26, we sat down with some members of our team that travelled to Glasgow for the conference.

We spoke to Nicola Day, Greenbank’s deputy head, Craig Leslie, investment director, and Kate Murphy, investment analyst, and asked them for their thoughts on COP26, its outcomes and their personal experiences from the fortnight.

How do you feel COP26 drove forward climate ambition within business?

The team were impressed that COP26 had a strong focus on the role of business in driving forward solutions to the climate crisis. “It was clear to me that business was at the centre of COP26, with a notable presence from companies across a wide variety of sectors”, noted Craig.

“The outcomes of COP26 will send clear signals to businesses to accelerate ambitions to prepare and adapt to a world where net zero is an expected part of good corporate practice”, said Nicola. Craig also praised the steer it gave to companies, noting that following the conference, “businesses have greater clarity about the pace and ambition of the transition to net zero and are able to align their practices in order to contribute and benefit.”

What changes do you expect to see within sustainable investment as a result of COP26?

The team agreed that the sustainable investment industry has been through a period of rapid growth, with Nicola claiming that the conference “has provided a helpful signal to all stakeholders in the financial sector, from investors to leaders of corporations, that sustainability issues need to accelerate up agendas.”

Craig emphasised the evolving nature of the conversations that he has been having with clients. He stated that “for a number of years, we have seen a behavioural shift away from individuals looking to purely avoid companies with a negative impact, towards the desire to have a more positively aligned investment approach.”

The team also welcomed the impact of new standards in sustainable investing. Nicola said that “further clarity on sustainability reporting standards from the International Financial Reporting Standards (IFRS) and the International Sustainability Standards Board is welcomed, and will set important benchmarks and foster more responsibility, transparency and accountability across the investment community.”

Craig added that he is “hopeful that developments around reporting standards, coupled with increased demand from investors to invest sustainably will drive innovation in this space and provide more genuine impact investment opportunities. This should in turn allow capital to reach the areas that need it most and provide further impetus to the just transition.”

What was missing from the finance commitments at COP26?

There were several areas where the team felt the conference commitments could have been bolder. A key issue for Kate was that the conference failed to end “not just coal extraction but also wasteful investment in oil and gas exploitation.”

Kate was also disappointed that finance commitments around adaptation and loss and damage were delayed to next year, given the desperate need of some developing countries, and the dependency that many national climate action plans have on this funding.

Regarding carbon markets and carbon pricing, Nicola was appreciative that “significant progress was made on Article 6 relating to carbon markets, which lays the foundations to develop and operationalise carbon trading mechanisms.”

However, Craig stated that he would have liked to have seen something “more concrete around carbon pricing to drive up the cost of inaction and force the most polluting companies to improve their business practices.” He reasoned that “the concept was the most consistently mentioned point” at the events he attended and added that “there is a strong view that this could be one of the most effective tools to accelerate decarbonisation.”

Personally, how did COP26 change your perspective on the climate crisis and future action?

The consensus among the team was that overall, COP26 had been successful in building momentum around the need for urgent action on climate change. Craig felt “quite positive about the prospects for change,” and was encouraged to see “representatives of governments, business, finance and all parts of society discussing a wide range of topics relevant to climate change. Especially as these discussions included previously overlooked topics such as biodiversity loss, gender equality and social injustice with a collective understanding of their importance.”

Nicola commented that she felt “extremely inspired” after her time at COP26. “The blue zone was a hive of activity with a packed agenda of meetings each day in the multitude of conference halls, while intense, multilateral negotiations took place in the background. There was a great sense of unity and collaboration from across the globe to tackle climate change from many different perspectives. It was inspiring to hear from a wide variety of actors and to have an insight into the many initiatives on the ground and the networks being formed to accelerate the transition.”

The team were particularly encouraged by the role that financial services played in the discussions. Kate stated that COP26 had reiterated to her that “there is a key role for business and the investment community to play in allocating capital to enable the low-carbon transition and, importantly, this should happen in the next decade.” Craig added that he left the conference feeling “buoyed by the level of mobilisation of finance and business and the understanding that these areas are absolutely critical in reaching our climate ambition.”